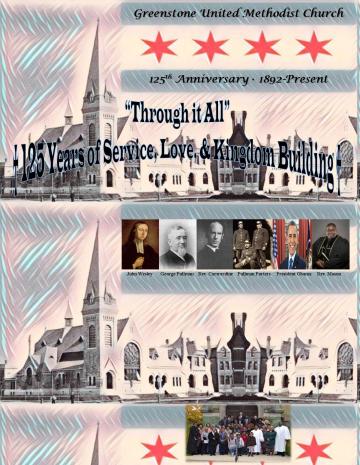 The Greenstone Church was built by industrialist George Pullman in his “company town” of Pullman in 1882.  Designed by Solon Beman, features a unique facade of green stone quarried in Pennsylvania. The original cost of the building was $57,000, and seats 600. With the exception of the chancel arrangements, the sanctuary has remained unchanged since the 1880s. The cherry wood that comprises the altar and pews, over 90% of the stained glass windows, and the two manual-tracker pipe organ are original to the building. The organ was built in 1882 by the distinguished firm of Steere & Turner as their Opus #170. It was originally powered by a hand bellows, then by a water-powered motor and now by an electric blower. The organ is otherwise in original condition and has had little repair over the last 100+ years, showing its high quality of materials and work. It is one of the few manual tracker organs remaining in the United States. The Green Stone Church was built to “complete the scene” of the town, but George Pullman having family roots in the Unitarian Universalist Church thought the building would be a church that was “for all to unite in union with the body”, and was thought that in getting a broad-minded evangelical clergyman, this would make Pullman’s dream reality. But it was quickly realized that each denomination wanted to worship in their tradition, their own language, with their own pastors.  The church building sat empty due to the high monthly rent while small religious societies met in rooms rented at the Market Hall, the Arcade, or the Casino buildings. The rent of $300 per month for the church and $65 for the parsonage to the south end of the building, were deemed excessive. The Presbyterians were the first tenants of the church, having leased the building by 1887. Following a much-publicized antitrust controversy, Pullman was forced to sell off most of the town, beginning in 1898, the year following Pullman’s death.

The ideal of a Methodist congregation in the Pullman community dates back to a Methodist “Class Meetings” in the Early 1880’s as the town was being built. By the 1890’s the small band of Christians under the Wesleyan tradition began to formally Worship, as historical records of the Pullman Company, and town reflect. While many denominations established themselves in Pullman, the Pullman Methodist Episcopal (ME) began December 11th, 1892, Worshipping first in what was called “Casino Hall”.

The Pullman ME Church played a role in the great Pullman strike of 1894, as her pastor Rev. William H. Carwardine emerged as one of the front line advocates for the workers’ cause during  the Pullman strike. The data he collected and his writings provided documentation for the legal consideration that led to the State Supreme Court ruling in 1896 that ordered the Pullman  Company to divest itself of all property not related to manufacturing. The Pullman ME faithful with help from the Annual Conference purchased the “Pullman Green Stone Church” from the Pullman Company in 1907, and it is said that at that time the congregation had over 100 “worshipping families” on the membership rolls.

The congregation has remained a pillar in Pullman, through its ups and down, and her members have held on to their faith in mission and ministry. In 1939 the Methodist Episcopal Church North & South and the Methodist Protestant Church merged to become the Methodist Church, and in 1968 the church merged with the Evangelical United Brethren Church to become the United Methodist Church (UMC) The Pullman church became Pullman United Methodist Church of the Northern Illinois Conference in 1968.  In the mid 1990’s with the closing of Washington Heights UMC, a number of those members came and joined Pullman UMC. In 2002 there was a merger, of the United Methodist congregations of: Fellowship (West Pullman) UMC, established in 1889, Pullman UMC, and South Dearing UMC, established in 1875, and became the Greenstone United Methodist Church. In February 2015 President Barack Obama named the Historic Pullman Community, one of  “America’s Newest National Monuments”, and the Greenstone UMC family is excited to be part of this honor as we faithfully love and serve “ALL” people in the Pullman and greater south side 60628 community.

In September 2016 we began establishing the “Opening Doors, Raise, Repair, and Restore! Building on the Past, Our Foundation for the Future, its A Mission Possible”, Church Restoration Campaign, which will consist of restoring the “green stone” facade and interior renovations. This project is a church and community partnership as we raise funds through historic preservation grants and privet/public donors/ funders. December 2017, we celebrate 135 years of our historic church building, 110 years of which we have called this house our home, 135 years of Methodism in Pullman, and 125 years of continuous mission and ministry as “A Historic Church in a Historic Community, a Church Filled with Hope and Life, Opening Our Doors & Reaching Out to Our Community & Neighbors, It’s a Love Revolution”, to God be the Glory!